Are you ready to join thousands and start your own service business?
Let's do it!

Co-Founded BookingKoala, home to thousands of entrepreneurs worldwide, and King of Maids, a cleaning platform. Grew his first business to over 5 million and 100 workers by 22 with $6,000 and no outside funding. Today focuses on helping businesses through BookingKoala.

The Unassigned Folder was a rushed part of the software that became one of my favorite sections of BookingKoala. After launching the first version of the software, one of our Providers let us know that they cant work next week. We tried moving the booking over somewhere to find a substitute provider for the current Provider. Well, we discovered that there was nowhere to transfer the booking, and it had to be either left with the current Provider, or it had to be canceled. 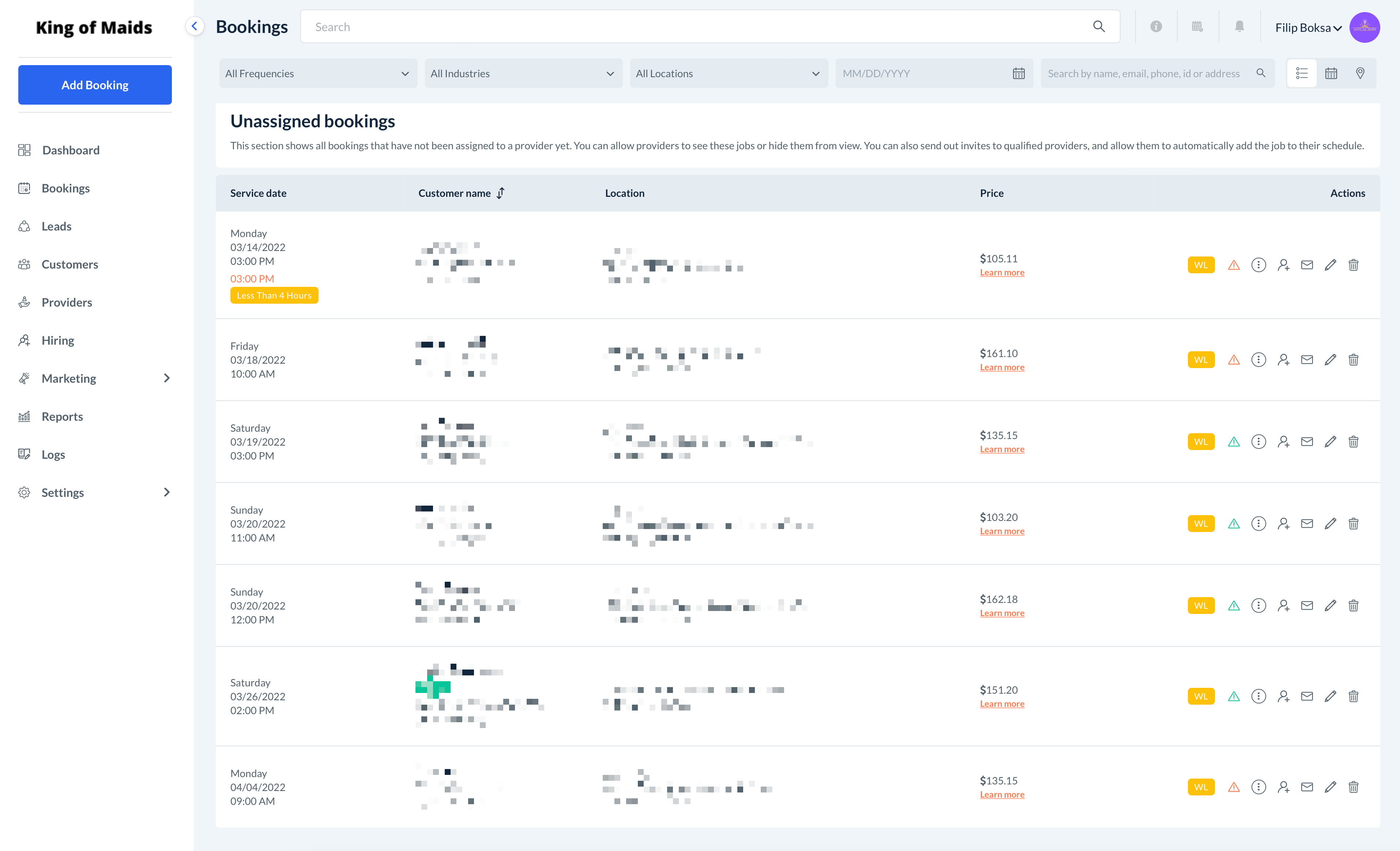 We noticed something very interesting when bookings are in the unassigned folder. Before, when we used to call Providers to pick up last-minute jobs or those not yet covered, they would often be declined. After the UF was released, almost all of our bookings were covered. I believe it’s because Providers check the UF frequently, and they pick up the jobs before someone else does. It’s fantastic because we were canceling many more appointments before, and now more Providers cover the jobs. Typically the only reason something is left is inside the UF is if it doesn’t look appealing to the Provider (it’s too far, too little invoice, or both).

Since we now had an Unassigned Folder, we decided to introduce a waitlist. When customers don’t see a spot they want, they can add themselves to a waitlist instead, putting their booking inside the UF. This is a fantastic feature because many extra bookings come in this way, and if someone cancels, we have another booking lined up for the Provider. This increases revenue and a lot of our customers enjoy this option. It also benefits our Providers because they have another booking they can grab when someone cancels.

Excellent addition to the Unassigned Folder is the invite feature. We had to call and mass text our Providers to pick up extra jobs in the past. Now the system does it automatically, and as mentioned before, a lot more jobs are already covered than when we used to contact them manually. On top of that, if someone doesn’t want to cover something, we manually send job invites to them. You can select the Providers and Teams you wish to invite to the job, and they will get a notification on their phone. If no one picks it up, you can send a reminder and attach a message to it.

We’re here to help. Get free education, tips, and inspiration to help you START and GROW a successful business.

From startups to those doing millions in revenue. Get help from supportive entrepreneurs.

Learn Step By Step How To Grow A Service Business

Get free online tips and resources. No spam. Unsubscribe anytime.

How To Start A Business (7 Steps To Freedom)

Starting A Service Type Business Has Never Been Easier

27 Small Business Ideas You Can Start Today With BookingKoala!

Learn from other entrepreneurs who are using BookingKoala to grow a service business.

Get Started
We use cookies on our website to give you the most relevant experience by remembering your preferences and repeat visits. By clicking “Ok”, you consent to the use of ALL the cookies. However, you may visit "Cookie Settings" to provide a controlled consent.
Cookie SettingsOk
Manage consent

This website uses cookies to improve your experience while you navigate through the website. Out of these, the cookies that are categorized as necessary are stored on your browser as they are essential for the working of basic functionalities of the website. We also use third-party cookies that help us analyze and understand how you use this website. These cookies will be stored in your browser only with your consent. You also have the option to opt-out of these cookies. But opting out of some of these cookies may affect your browsing experience.
Necessary Always Enabled
Necessary cookies are absolutely essential for the website to function properly. This category only includes cookies that ensures basic functionalities and security features of the website. These cookies do not store any personal information.
Non-necessary
Examples of non-necessary cookies include but are not limited to: analytics, ads, content engagement. We use such cookies to help deliver better content and other helpful material.
SAVE & ACCEPT